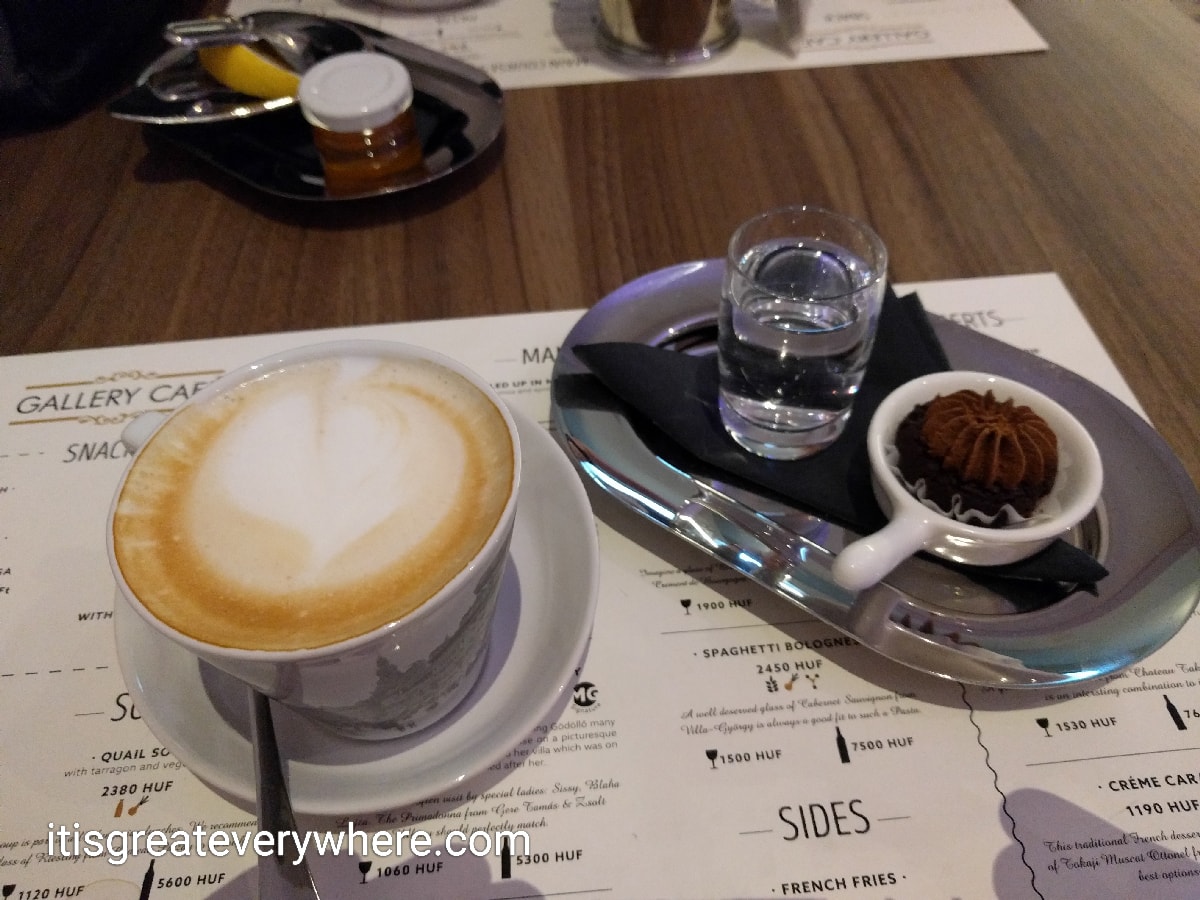 My mother raved about a coffee shop she enjoyed twice with her friend earlier and wanted to take me there. She had a special reason to do so, she remembered that it was one of the first places I ever worked and was curious how the hotel would compare to its former glory in my eyes. About 35 years ago, when I was 16 or so, I was a bell boy during my summer holiday at the “Nemzeti Szálloda” in Budapest, that is now known as “Hotel Nemzeti Budapest – MGallery by Sofitel“. The hotel was rather dilapidated at the time. It has been renovated several times since then and now it is a proper, luxury, four star, hotel albeit a bit bland for my state. The decoration–both visual and aural–was smooth, neutral, not a harsh or even vivid tone anywhere, easy one the eye and ear.  Sitting and sipping in its cafe area was a relaxing experience. Before we left we peaked into the main restaurant where I liked the white, shiny spiral staircase and probably would have liked the stained glass ceiling too if the lights above it would have been turned on. Maybe next time.

The coffee I drank was marvelous. I admit I prefer old-school, dark roasted coffee, despite the current trend of the more sour kind. This one was not just dark, but also had  an extra unique sub-flavor I never had before. I couldn’t identify it, but sure relished it. The fine china cup it was in had the building painted in it, which was a nice touch. Coffee came with a bite-size brownie, which was moist and sweet, just the way I like it.  Keeping with the theme that “everything was better in the olden days” she mentioned that first time she was there her friend’s coffee came with three tiny sweet cakes. I was happy with my one and would have bee happier and rounder with three. I believe my mother equally enjoyed her Earl Gray tea, particularly the little jar of honey she spooned in separately.

I don’t like to write negative things ever in my reflections as I always have reasons to feel “great everywhere.” Nevertheless to paint an accurate sense of my experience I have to admit that I almost exited right after we entered. There wasn’t even a hint of cigarette smoke inside, however I felt like the furniture or the carpet used to reek from it and is remnants still lingered.  I got used to it fairly quickly, but was surprised by the smell attack on my nostrils.  I was also astonished by the act that when we sat down the waitress took her time to come to our table. There were guests only at one other table out of many at the time and I saw that she was working on taking an inventory of the drinks. But she could have stopped for our sake and continue on later. Once we did have her attention her service was impeccable though.

Final fun note: I had a bit of hard time logging on to the wifi as I assumed that the network would be named after the hotel and I didn’t see no the list of available networks “Nemzeti” or anything similar. Once it dawned no me that it is now “MGallery” I had no further problems. Lesson slowly learned: expectations driven by memories are hard thing to overcome.