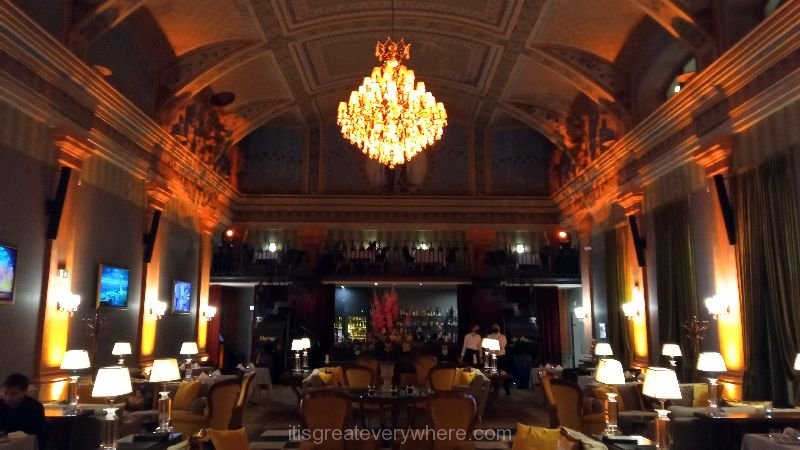 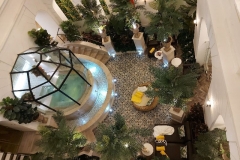 About a year ago in Budapest, we parked once on Podmaniczky Street next to the Western Railway Station. We have a habit of looking up to the roofs of houses because one can discover beautiful or strange things that would not catch our eyes any other way. Budapest is full of exciting decorations at the upper levels and roofs. That’s how we became aware of an unusually shaped terrace full of Freemason signs. Unlike the main square of Brussels, Freemason signs are relatively rare here. We decided to lear more about that house, but then nothing became of it, although we noted that the building bear the sign of Mystery Hotel. When its “The Great Hall Restaurant & Bar” showed up as an option for Restaurant Week, I knew right away that we were booking it as I wanted to check out its interior as well. 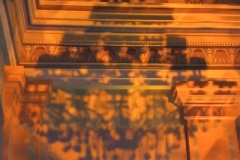 As we entered it took a few moments to get used to the stunning design of the lobby. At first I couldn’t decide if it was tastelessly flashing or elegantly eclectic. As we walked around a bit, however, my inner voice voted for the second option. It really had an unusual amount of gold and segments of (replicas of) classic paintings and sculptures were integrated into the design of the interior. In the end, the overall effect was rather pleasant than distrubing. One of the surprises was that the inner courtyard of the building, which had been converted from an apartment building, was repurposed as a spa, with a jacuzzi in the middle, surrounded by dozens of (artificial) palms. One day we may try this too because we like to try high quality spas in the city. 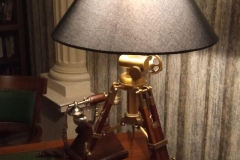 As it turned out, the terrace on the roof we saw from the street is a rooftopbar which was closed by now, being too cold in mid-October. Based on the picture and the reviews, it seemed a promising place. Instead, we had dinner in the great hall-lodge on the fourth floor. The official name of the restaurant is The Great Hall Restaurant & Bar and it was really a Masonic lodge in the past. You can read the history of the building on the hotel’s website. Although these are just a few paragraphs and it does not reveal, for example, what we learned from the porter that the current owner removed all the Masonic symbols from the inside so as not to disturb the guests. The only real reminder was the lamp on the table at the entrance to the great hall. 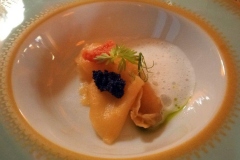 The hall itself was really grandiose. The huge chandelier was illuminated by orange lights, creating a wonderful shadow play on each wall. On the walls flat-panel monitors displayed continuously moving animations combining pieces of classic paintings and modern photos. When we arrived at the restaurant, there were more employees than guests, although this ratio was reversed by the end of our stay. All the 5-6 wait staff we came in contact with were well-mannered, polite and knowledgeable professionals. We can’t have any complaint about them: they made the evening more enjoyable.

If a place gives you offers any unexpected extra service I can really appreciate it. Here, before the first course, they brought out some delicious salmon with three kinds of caviar and a sauce that I unfortunately forgot about its ingredients. 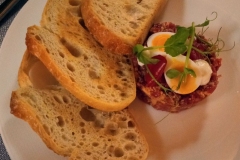 Of the five appetizers to choose from, we ordered the first two. We also asked what “Raffaello” refers to. It meant that the balls they make out of goat cheese had an uneven surface. We didn’t take that, but I can honestly say that my duck rillette came out pretty well. The slices of olive bread accompanied with the succulent fat and chunks of meat found in the small jar. Maybe you can see on the attached pictures that tendrils of young pea were used as a decorative element on several dishes. A simple little motif that enhanced significantly the presentation. There was no problem with steak Tatar either. I am used to either mixing it for myself or serving it mixed. Here they thought there was a solution somewhere in between. The ring of meat had quail eggs on it that were halfway between hard and soft boiled. Thus, its yolk could, in theory, have been mixed into it. But it wasn’t flowing enough. For me, the taste of meat was fine without it. My wife added some spices to hers because she often prefers food spicier than I do. 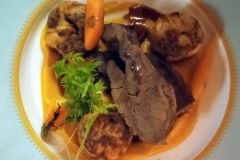 Main courses to choose from:

Before we chose our main course, we asked how the grapes were part of the trout dish. The answer was: only decoration. We found it a little strange why it was mentioned on the menu then, where only the main ingredients of a dish were usually listed. We stayed with the cattle and the duck breast. Has we graded the main dishes both would have gotten an A minus, for purely subjective reasons as they were both excellent. The beef was tender, and just salty enough. The dumpling was spiced with something interesting, that I could not identify, and it made its flavor remarkable. The sauce itself, which is the essence of tis dish, was spectacular. That’s the real reason for the “minus”: for my taste there wasn’t enough sauce for this much dumplings and meat. Or I might just have to admit I wanted more sauce, it was so delicious. 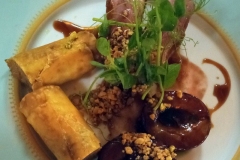 In terms of duck I am pampered: my wife prepares it so well. The very first time she ever cooked for me she baked ducks. This masterpiece may have played a role that she is my wife today. Call me biased, but the duck breast here wasn’t as good as hers. I did say I would be subjective, didn’t? Of course, there was nothing wrong with it here either. The cabbage “strudel” made this dish special. It wasn’t really a strudel, more like Mexican taquitos stuffed with the cabbage stuffing. This small but substantial change made the catch memorable. 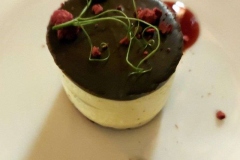 Desserts to choose from: 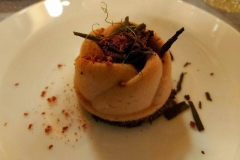 From the desserts, wanting chocolate, we asked for those that had some. Their look surprised their taste. They weren’t sweet enough for desserts and not chocolaty enough for our longing. The latter is our fault, as the description could have revealed that these are chocolate desserts, but fruity with some chocolate. Nevertheless, they were top notch, just not exactly what we expected and desired. I ven drank a “Gin Basil Smash” cocktail with dinner that contained lemon, basil, simple syrup, and “cucumber bitter,” i.e., bitter cucumber drops, in addition to Hendrick’s gin. It was the first time I had this cocktail, but probably not the last. I liked it. 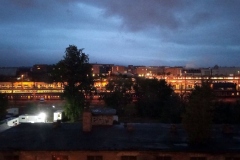 We guessed that to dine in the restaurant of a five-star hotel, that reopened only two years ago would be a idea. Our expectations were far surpassed by both the environment and the combination of the dishes and the whole menu. If I’d written anything above that might seem negative then just take it as an acknowledgment that nothing is perfect. However, our dinner was close to it. 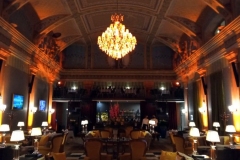